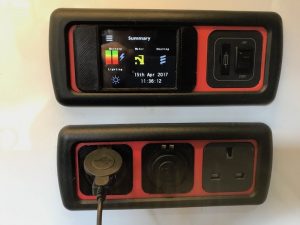 Why build a controller ?

This all started when I decided to convert my own camper van (A Volkswagen Transporter T5) into a motor caravan. I was looking for something that would handle all the different electrical functions that I wanted. It would need to do this without covering the walls with switches.

Commercial controllers that are available failed to meet all the requirements and were cost prohibitive hence this project was created. This site details the solution I came up with and will give step by step instructions on how you can create your own. Source code for the project will be available to download and the whole thing can be built for less than £100.

Why buy from Amazon ?

The hardware links throughout this site refer you to Amazon. Clicking on a link and ordering the items donates a small percentage in Amazon vouchers to the project. The resulting vouchers help pay for different hardware options to experiment and progress this project. Leaving feedback in the form of comments, contacts or simply by buying through the links, will keep the project alive.

An earlier project produced a unit to measure and display data from a display aeroplane engine. That project was based on an Arduino CPU with a TFT touch screen display and initially that seemed like a good basis for something to integrate into my van.

The first prototype for the VW Transporter utilised the same hardware as the engine display unit. The display mounted directly on the Arduino and the Arduino handling the display and touch screen functions. This worked OK but had a number of limitations and was a bit clunky. The biggest issue being that the display had no way to turn off the backlight. In a camper van, while trying to sleep, a panel backlight cause a lot of ambient light.

What can it control ?

The eventual, finished, unit has a whole host of possible functions but the original aim was to have the unit control and display the following…

The default settings and configuration is suitable for a VW Transporter T5 full camper van conversion. It’s likely that many of the functions for other motor homes, camper van conversions and even caravans are very similar. Some changes may be necessary to customise the controller for your conversion. Hopefully the customisation process will be as painless as possible. If you are unsure of anything you can also add a comment.

Who can build it ?

To complete the build in the way I’ve done it you will need to be able to solder to a reasonable standard. It is possible to build the control panel using plug in wiring but in use in a vehicle it may be prone to the wires vibrating loose over time. If you cannot solder then there are huge numbers of guides available  and it’s not difficult to get the hang of with a bit of practice.

You will need to be able to load software onto the Arduino and also the Control Panel and possibly make small, simple alterations to the Arduino source code. As long as you are methodical and take it step by step it’s not difficult and hopefully this guide will help you through it.